As the landscape of greater Naples changed by an infusion of youth, Covenant Presbyterian was committed to build bridges to the future. Though it is a daunting challenge, they were not going to stand idly while values unravel and families disintegrate in a postmodern culture. It was their vision and biblical responsibility to reach the next generation. As part of a multi-year project, Covenant Presbyterian Church decided to build a new 700 seat, 33,000 square foot transcendent sanctuary in addition to classrooms, meeting rooms, loggia, and all the modern technology to reach today’s audience.

Paragon 360 was contracted as design-build partners for the design and installation of audio, video, lighting, acoustics, distributed audio systems and digital signage. The design started in early 2009 and the church opened its doors in July of 2011.

“Paragon 360 worked with us in the beginning to find out not only what kind of technical requirements we would be looking for but also what was the experience going to be like in the space."

At the top of the churches priority list was the quality and intelligibility of the spoken word. “This was a real challenge in this space due to the fact that the architectural design of the worship center included a 60’ open Cupola over the stage area and a portion of the audience” stated Donnie Brawner, Paragon 360 CEO. “While the cupola was impressive it certainly added some work on the front end of the design process to find the best way to achieve high intelligibility that was attractive. Not only were we dealing with the spoken word but also the praise and worship music in a very open space.”

The approach was through the careful implementation of acoustic treatment along with a highly directional speaker system to keep acoustic energy away from reflective surfaces. Much time was spent finding a solution that really worked well in the model but was also attractive. A small line array system from Electrovoice was chosen for the project and was flown high to stay out of sight lines while delivering the necessary coverage and pattern control. Two small powered subwoofers by Bag End were mounted in stage cutouts to augment the low-frequencies. The church had a strong desire to utilize an analog mixing console, so a Midas Verona was chosen at their request. Soundtube ceiling speakers were installed throughout the new facility within auxiliary areas and JBL Control surface mount speakers were utilized in the main entrance. The acoustic design played a big role in the space. The model created by Paragon 360 was comprised of cupola treatment, balcony front treatment, balcony rear wall, and ceiling treatment.

The video system at Covenant was designed to be cutting edge but at the same time be aesthetically pleasing and very unobtrusive. Christie HD projectors were used on the Dalite 16:9 rear-screen video screens with an Analog Way OPS300 presentation switcher. To further conceal technology, three Sony HD PTZ cameras were installed throughout the sanctuary to capture the worship experience with a true and crisp image. Vaddio PTZ camera controller was installed to allow precise camera movements while a Broadcast Pix Granite 1000 HD production switcher provides the ability for the church to create compelling live video productions. Paragon also provided digital signage systems which included six displays installed throughout the facility.

The lighting system was designed with ETC Paradigm system which allows sophisticated facility-lighting and building systems integration. It does so with unprecedented flexibility and simplicity: a green-minded energy-management system that capitalizes on daylight-harvesting, occupancy sensing, and time schedules for maximum electricity, and budget savings. The stage-lighting system included over (70) ETC lighting fixtures and several additional ETC Source Four Pars for house-lighting. There were over (9) lighting positions that were designed to be concealed and aesthetically pleasing. Over (40) Chauvet LED units were used for the lighting of the cupola area over the stage. 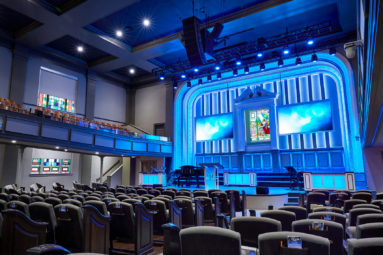 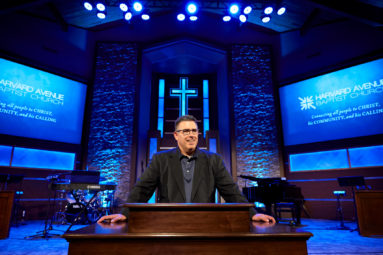 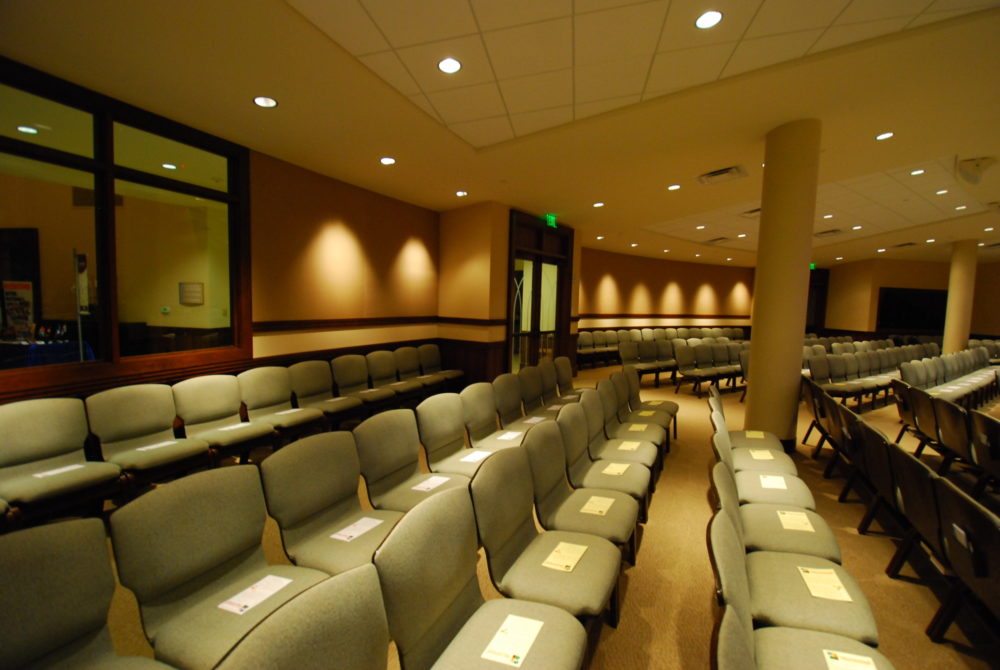