In early conversations between Senior Pastor David Jett and Paragon's CEO, Donnie Brawner, Pastor Jett often expressed the desire to maintain or increase the intimacy of the space, improve the intelligibility of the audio and warm the over-all experience in the room. Multiple meetings happened over several years, but in 2015 Crossgates Church in Brandon, MS, contracted Paragon 360™ to lead the design process for an expansive, full-scale sanctuary renovation project.

The project would include everything from new audio, video and lighting systems to custom scenic, a new modular stage, motorized rigging systems, Fabri-TRAK acoustical work, seating, flooring, paint and replacement of their stain glass. After a year of design work and several months of renovation and installation, the project was completed in January of 2017.

"Transformation? Absolutely 100% different. Just like walking into a new facility. It was amazing."

The Crossgates project pushed the Paragon 360™ Design Team into uncharted territory, utilizing cutting edge, state-of-the-art technology and systems integration in ways that had simply not been done before. Our Designers worked hand-in-hand with multiple manufacturers for several months to ensure the technological capability that Crossgates was seeking was not only possible, but would work flawlessly in a multiple worship style environment. Worship Pastor David Oliver highlighted Paragon’s ability to bring all of the desired elements of Crossgates together, stating “There’s really no other company that can take all the aspects of a worship center – the scenic, the lighting, the audio, the video – and move it together in such a pattern and a synergistic way to where it becomes just so easy to use it to engage people in worship. It’s just a powerful thing.”

Excellent Audio at Every Seat

The Paragon 360™ Audio Team designed and installed a system worthy not only of multiple worship styles, but one on par with any touring concert venue in the country. The main worship center audio system is comprised of the largest Bose RoomMatch speaker system in the country, featuring three main line arrays and an end-fire subwoofer system. This speaker system is powered by 14 PM8500N amplifiers and processed by an ESP880. Stage distribution is handled with 60 channels of Whirlwind Patch Master modular snakes, along with multiple floor pockets distributed around the stage. Additionally, two Avid S6L consoles manage Front of House and Broadcast audio duties, utilizing two Stage 64 I/O racks for a total of 128 inputs. An Avid S3L console handles all Pro Tools mix down sessions captured during the services, as well as creating in-house stems for use with the band.

Due to the wide scope of worship capability desired by Crossgates, the wireless microphone and personal monitoring systems utilized are substantial. The wireless microphone package includes 32 channels of ULXD4Q digital receivers, 14 handheld Beta 87 microphones, and 18 body pack transmitters with Countryman headsets. The personal monitoring system includes 24 Roland M-48 mixers which feed 16 channels of Shure PSM1000 transmitters. Two Klark Teknik DN9652 were used for sample rate conversion, and an RME MADI router was used to feed the 40 digital inputs to the Roland REAC MADI bridge. Traditional floor monitor mixes utilize EAW Micro Wedge monitors, and a single flown Bose Room Match module is used for the choir loft. A dual channel Axient Wireless System is used by the Pastor and Music Pastor during worship, with the Pastor utilizing a DPA headset, and the Music Pastor utilizing the Axient ATX200 with the KSM9 capsule.

The organ was implemented into the new audio system with the use of Whirlwind direct boxes and Ashly MX-206 mixers. This setup takes the nine speaker level outputs from the organ and converts them to line level, allowing all of the organ tones to be mixed precisely, and then put into the sound system in a controlled fashion. This setup greatly reduces the amount of organ in the choir mics, and also allows a greater separation of mixing, especially for broadcast purposes.

From design to delivery, we bring value to vision

The Paragon 360™ Video Team designed and installed a system for Crossgates that showcases amazing flexibility. In addition to being a powerful communication tool for the church, it also offers impressive production capabilities. The visual centerpiece of the worship center are the three large format Da-Lite Lace and Grommet Screens with HD projection surfaces. Three Panasonic 3-Chip, 12,000 Lumen Laser projectors provide content for the screens, allowing for worship graphics content, video playback, and any switcher video content or camera shot, which can be shown on any or all of the screens as needed.

One of the more unique aspects of the video system is a Fingerworks Telestrator controlled by a touchscreen built into the pulpit. The telestrator allows the Pastor to point out and highlight items on his teaching slides, which can simultaneously be viewed by the congregation on the three large projector screens. The system also includes a 75″ touchscreen display that can be placed on the platform, providing the same functionality in a more intimate setting. Additionally, behind the Pastor is one of the most prominent scenic elements of the installation. A Video Background Wall, custom designed and built by Paragon 360 consists of three 80” Flat Panel Displays over three 80” Flat Panel Displays, creates a virtual video background for the center of the platform. This serves as a very effective and flexible background for the primary camera shot of the Pastor or others at stage center. The three top displays are on lifts that descend behind the three lower displays to reveal the Choir Loft behind the Scenic Video Wall.

Because a video friendly lighting wash was of great importance for the lighting system design at Crossgates, the Paragon 360™ Lighting Team chose 52 Chauvet Ovation E-260WW LED ellipsoidal fixtures that produce a flat, even field of light. These virtually silent fixtures boast extremely smooth dimming and are powered by single source LEDs, which allows for smooth and even coverage over the entire stage area. For back lighting, 14 Chauvet Rogue R2 moving head LED wash fixtures were used to produce a bright, powerful and even coverage. The fixtures’ zoom range of 12° to 49°, coupled with their smooth color mixing and dependable movement, also provide a variety of looks and lighting designs for different types of performances.

The existing house lighting at Crossgates was replaced with full color, LED house lighting. 59 Chroma-Q Inspire RGBW fixtures, equally adept at soft pastels and bold saturates, give Crossgates the ability to transform the look and feel of the entire venue by seamlessly transcending the physical barrier between the stage and congregation. Full color LED lighting was used extensively throughout the set, adding many opportunities for variety and depth of design.

“If there’s a client that’s looking to partner with Paragon, I’d like to tell you it is a partnership. The men work with integrity, they work with character, they do what they say they’re going to do. If you’ve done your due diligence and it’s brought you this far, just choose Paragon and get to work. It’s the right thing to do.”

Learn more about our services
Meet our team of experts 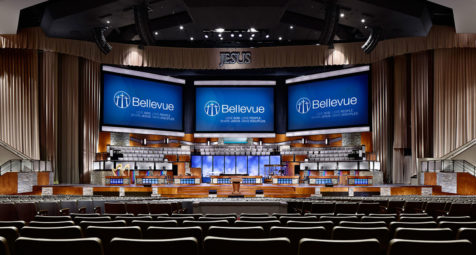 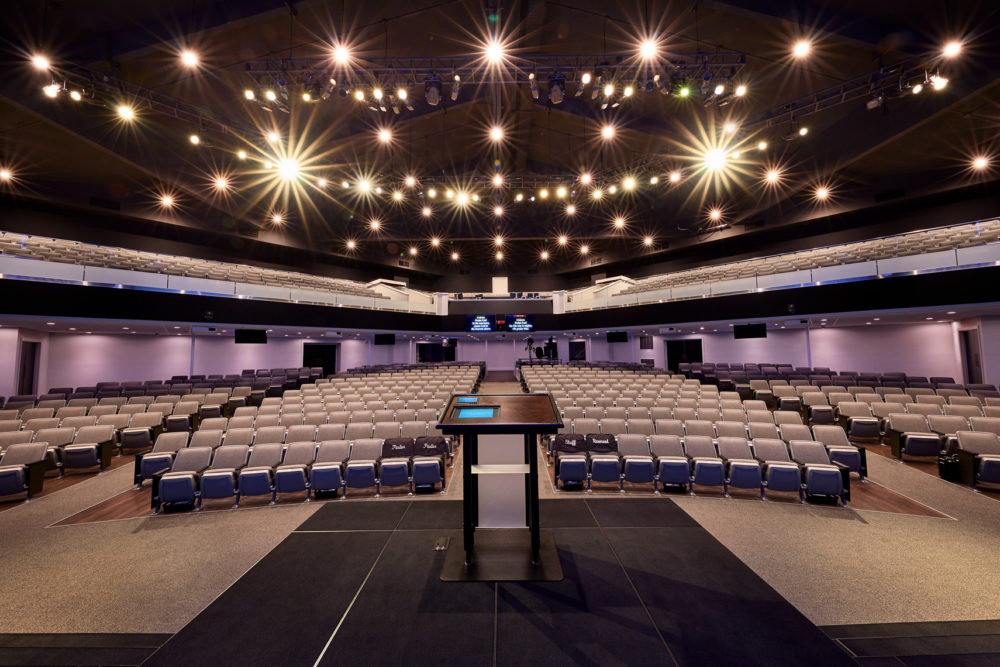