Family Church of Marco Island, Florida opened its doors on its new facility in April 2008. The $10M facility included a 500-seat sanctuary, classrooms, multi-purpose rooms, children and youth spaces and over $1M in professional AVL systems. Paragon 360 was hired in May of 2006 as the church’s design/build partner. Paragon 360 not only provided all AVL, rigging, scenic, staging and acoustical design and installation services but also designed the main sanctuary space completely from layout to seating, ceilings and stage space.

The 500-seat auditorium includes a professional audio system consisting of Electro-Voice and EAW components in addition to a distributed speaker system throughout the facility inside and out. The lighting system incorporates conventional and automated lighting, LED lighting to offer ultimate flexibility for theatrical presentations and broadcast production. The high definition video system feeds live and pre-produced content to three I-MAG screens and digitally records program material for post-production. The system includes an operator-controlled camera, two remote-controlled cameras, and a full video edit suite. The motorized rigging system enables staging flexibility with multiple battens for stage electrics and scenic pipes. Digital signage displays are installed throughout the facility and driven via a matrixed high definition content server. Electronic Media systems that interface with the Edit Suite were also incorporated in children’s areas, youth rooms and fellowship halls.

For scenic flexibility and vibrant color backgrounds, a three-dimensional custom wall unit was designed with LED lighting. The LED lighting allows for rich color saturation without the power consumption, lamp replacement and maintenance costs of standard lighting. A multi-dimensional cross with interior LED white light neon was built that travels in and out and can be used at any time. In addition, there is a 16’ X 9’ center video screen unit that travels. The stage battens are designed full stage so that the cross or center screen can be removed for the addition of drops, curtains or soft-sets for special events or message series.

A full stage curtain can be drawn to facilitate weddings, funerals or special meetings without effecting the stage setup for Sunday services. The ceiling over the stage is acoustically transparent and provides a visual surface that is back lit with LED color changing fixtures. This works with the back wall for endless color options and message toning. Paragon 360 also designed an acoustic island ceiling over the entire auditorium which acts as a masking device for the front lighting positions, audio speakers and house lights. The custom ceiling together with specified sound-dampening wall panels resulted in outstanding acoustics in the Sanctuary.

The entire 500 seat sanctuary space was designed by Paragon 360 with the goal of intimacy, flexibility, and future expansion in mind. Road show or parking lot special event power was designed into the system. The church has the capability to do television broadcasts, stage productions, concerts or intimate live services in the feel of a small space with the technology of the largest space. 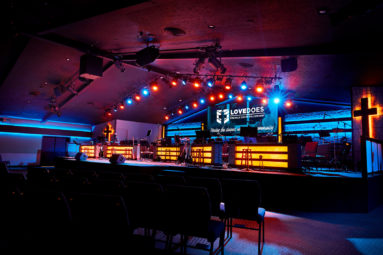 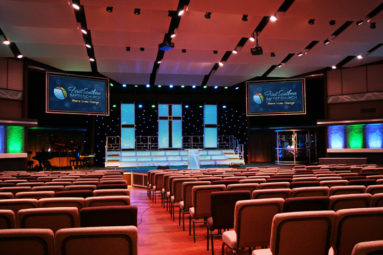 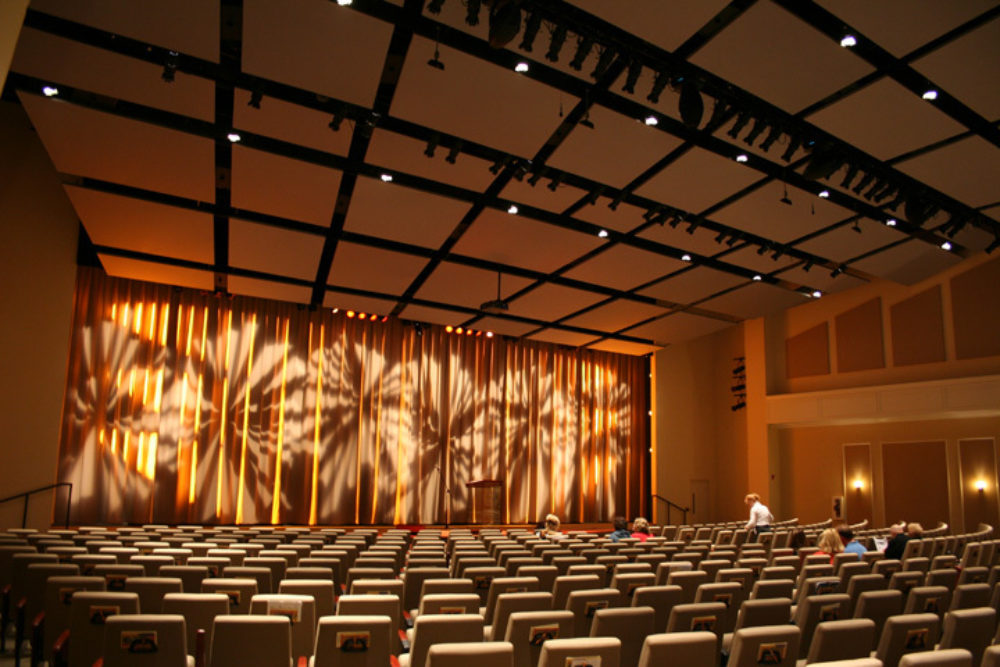