Sherwood Baptist Church in Albany, GA has 3,000 members and has averaged one hundred baptisms each year. Thousands have joined the church from Albany and twenty-nine surrounding communities. Sherwood has three campuses covering 130-plus acres—the main church campus, the lower school campus and the upper school campus. In addition, there is an 82-acre Sports Park with tennis courts, soccer fields, baseball fields, equestrian center, fishing pond, pavilion and other facilities to reach the community through sports and recreation.

Sherwood Pictures is one of the things that stand out at Sherwood. This ministry began with a conversation between Michael and Alex Kendrick on a back lot tour of Disney World. That conversation gave birth to a very “out of the box” church outreach that has impacted the world. Senior Pastor Michael Catt has also served as the Executive Producer of the Christian movies Flywheel, Facing the Giants, Fireproof and Courageous.

"Sherwood Baptist Church has the utmost respect for the Paragon team. They will provide you with quality solutions, the best customer service in the country and have a real heart for the church. They truly get it.”

Paragon 360 has been working for Sherwood since 2004 and has completed four turn-key projects for the church. The largest of these was a complete renovation of the audio, video, and lighting systems in the 2,250 seat main sanctuary. This included replacing the main central audio cluster with four JBL AM-Series long throw/short throw clusters and allowed even, accurate coverage throughout the floor seating areas. In addition, soft-goods were added to clean up catwalk sightlines and acoustics. The lighting system was upgraded to include fixtures, automated units and control systems as well as new motorized front-of-house lighting positions and upstage back-light positions. New projectors were also added to the video system.

In 2010, Paragon 360 renovated the Sherwood Fellowship Hall which included the installation of a new audio, video and lighting systems. The stage was renovated with theatrical rigging capabilities and soft-goods to be used in special events, concerts and productions. Paragon 360 also provided audio and lighting services for an outdoor pavilion project at Sherwood’s new 83 acre sports park in addition to LED lighting upgrades in their sanctuary. 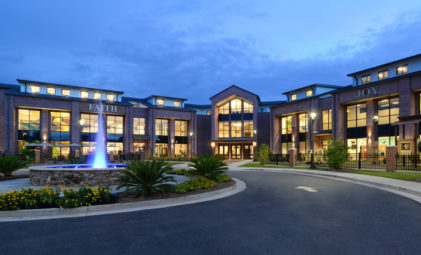